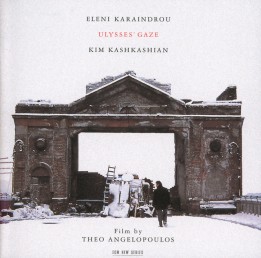 I’d like to think that Eleni Karaindrou’s Ulysses’ Gaze appeared in my albums of its own volition. A find during my graduate school years, when I struggled with my instincts over what my professors declared to be good writing. Literary fiction sprang from dark, terrible real-life things. No one likes to read happy endings, and for Christ’s sake, don’t write for kids. And, of course, the unspoken rules, the loudest of them being genre stories were a waste of time. So I was left trying to understand what “proper” story could be told in my voice, its confidence shattered.

The voices in Ulysses’ Gaze contend over the same melody throughout the album. The melody remains the same; it is the sound of that melody, so altered by the simple shift from viola to other instruments, that creates new emotion, be it longing, uncertainty, or malice. As the oboe, French horn, and others speak the melody to each other, I cannot help but imagine the four Pevensie children first entering Narnia together, unsure as to what they stumbled upon or what to do, the French horn voice of Aslan calling from afar.

The music encourages footsteps into the unknown, even if your characters cannot agree on how to go about it. It struck me that such a scene could help reveal important traits in my protagonists, who escape the plans of their scheming parents by fleeing into enemy territory. Once surrounded by stars and silence, they quietly argue over their plan, back and forth like Karaindrou’s variations of “Ulysses’ theme.” Their freedom is precious and sad. Yet hope is out there, echoing their words in the wilderness.

Perhaps your characters need some time in a quiet wood to debate their future. Give them Karaindrou, and watch your story step into the unknown.