Upon Bo’s insistence, I took a break from grading school work, social media, kids, the lot. The plan: meet my friend Rachel (not the one recovering from a brain tumor—most Lutheran mothers were compelled to name kids of my generation Rachel, Sarah, or some form of Kristine) at Polish Fest.

Milwaukee is a hub of summer festivals. Summerfest is the “world’s biggest music festival,” apparently, and there’s German Fest, Pride Fest, Bastille Days, Feste Italiana, India Fest, Irish Fest–just, gobs of stuff. I don’t live in Milwaukee, so attending these goings-on is a rare treat for me. I decided to take advantage of childlessness and attempt something  Inesemjphotography does brilliantly all the time:  chronicle life.

What did I learn? Capturing people is hard! Take these monks, for instance. (Seriously, take them–ba dum CH!) I was too nervous to stop in front of them and flash the camera like they were some sort of oddity,even though they were an oddity in Milwaukee, and I couldn’t for the life of me figure out what they were doing there.  Had they come down from Holy Hill?

Later Rachel and I discovered a few more inside the Polish Fest grounds by a beer stand. Apparently the monks had made the beer….not that I got a picture of that…

We enjoyed some Still Stormin’ polka by the festival’s entry. A few even took to dancing, like this fellow in the red shirt. (By dancing, I mean a slight bending of the knees mostly in rhythm with the bobbing of his head. That’s how I dance, anyway.) 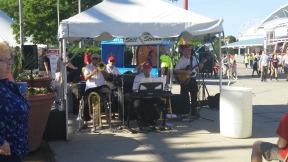 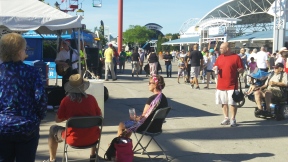 Determined to spot interesting characters, we meandered about. 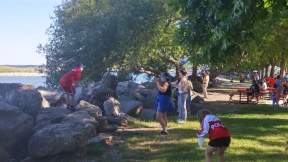 This particular gentleman was something of a clay mound of curmudgeonness. His eyes moved only when people came anywhere near his art.

Lake Michigan. It can look beautiful by Milwaukee if you time it right. Never look upon its shores after a storm; city sewers dump disgusting horrors, and you can’t help but wonder if the film Wall-E is a reality not far off, after all.

Some displays, and a sun I decided had to be artfully captured over the dragon’s head, and therefore rather lost the Wawel Dragon.

“I hope this isn’t a secret effigy,” Rachel said of the doll. And I have to admit, the way these dolls were tied onto the posts, I was rather worried if those Milwaukee blacksmiths had other activities planned for their forge’s fire. 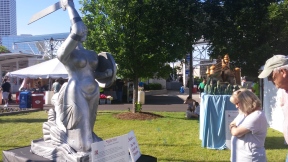 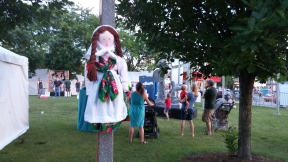 My attempt at people pictures was feebler. More feeble? I’m amazed no grammar check popped up with feebler. Who says feebler?

The sun wreaked havoc on my shots. The sky itself had barely a cloud, but once the sun reached a certain point in the sky, all my shots looked like I had a thin coating of Vaseline on the lens.

At least I found more monks. Rachel kindly obliged for a shot, too. 🙂 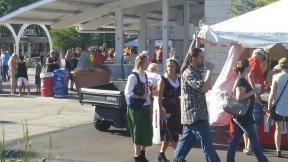 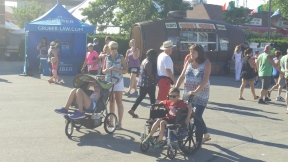 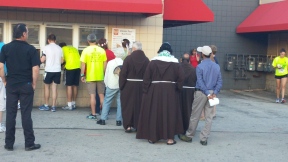 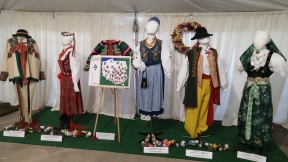 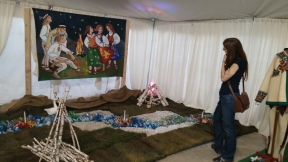 Over the course of the evening, I also learned just how hard it is to capture characters. Professional photographers have an eye for the elements of setting and person that create a “scene” or a “character.” When one is NOT a professional, and is determined to FORCE such shots to happen, one doesn’t get much. Rather like writing, isn’t it?

Thankfully, Polish Fest gave me a few lucky breaks, sunlight aside. These ladies were cultural assistants, driving around the festival and answering questions.

Some sort of run/walk relay was about to start. I’m not sure why that would require elf-heads, but then, this was my first Polish Fest.

Saw this and felt a pang for my kids. Blondie and Bash would love to be nude all the time, if not for, you know, public decency and all that. (Biff is the shy one for some reason.)

I also couldn’t help but be impressed that the mom had successfully tied that balloon to her daughter’s hair, and it stayed throughout the clothing change.

But here, here stood my ultimate failure on this photographical excursion:

I know, they’re just a couple. But she in a loud, newer Star Wars shirt with Darth Vader and his lightsaber on full blast, he with a mustache that HE KEPT HIDING FROM MY CAMERA BLAST HIM

He with a mustache that would have made Hercule Poirot proud.

Sentence fragments aside, I felt like I had finally found my characters. I would have loved to eavesdrop on their conversation and discover what brought them here. Heritage? Boredom? A secret meeting of sci-fi mystery enthusiasts?

But alas, they moved purposefully away from my loud phony speech as I “CHECKED MY PHONE” for…whatever, I forget. Pretty sure I’m not made for undercover work…but then, Poirot wasn’t much for undercover, either, and he was still one of the world’s greatest detectives.

And to top it off, they ran out of paczkis. 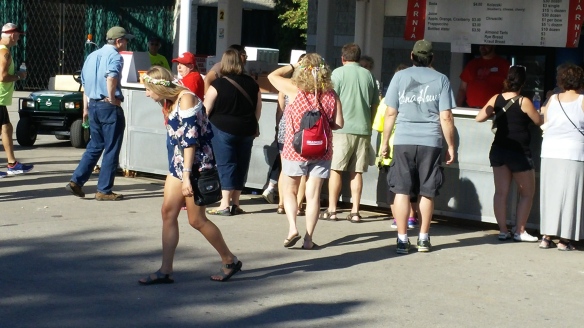 It seemed best to pack it up, camera-wise. My timing was off, the sun was horrible. Only so much quality could be had from a smart phone’s camera, anyway. And there wasn’t anything to really notice. Maybe I’m being hard on Milwaukee, or maybe I’m being hard on Polish Fest. Maybe I just don’t get out enough, but I thought for sure such a niche festival would have drawn a more unique flavor of life out of the community. Right now, all I could taste was the very American cheddar cheese in my pierogi. 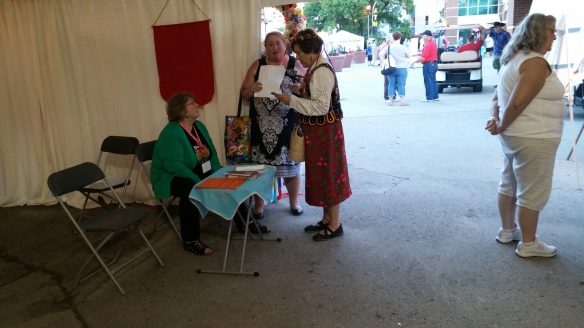 “Let’s at least try some culture,” Rachel said with a nod toward a long tent off the main walkway. I follow, still slumped. No paczkis. No nationally renowned polka bands with dancing contest. No delectable paczkis. No fascinating people who stand still in a dramatic fashion at the right moment to be preserved for all posterity. No powdery paczkis with oozy raspberry goodness in the center. No cooking demos instructing one on how to make her own paczkis lest such a tragedy were to befall one again.

We walked in, and I lost my slump. Still no paczkis, but there was a fascinating man with some sort of mini-telescope around his neck spinning wool into thread. Angry, spooky pottery. Straw creations that hailed me back to my childhood, when I had tried to follow a Swedish pattern for straw Christmas ornaments. Polish women who had made hats for the Resistance back in *mumble white noise date lost mumble* and were now making them to sell, along with flower wreaths. “Try them on!” They had that sort of loud-laugh-command voice, the kind where they sound light-hearted, but that’s only because they’ve got rolling pins at the ready under the table. 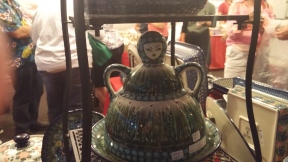 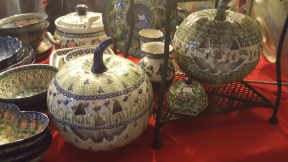 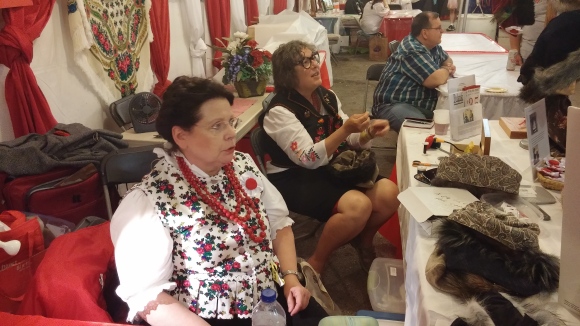 If there’s anything I’ve learned from my very Polish grandmother-in-law, it’s that you don’t mess with an old Polish woman. 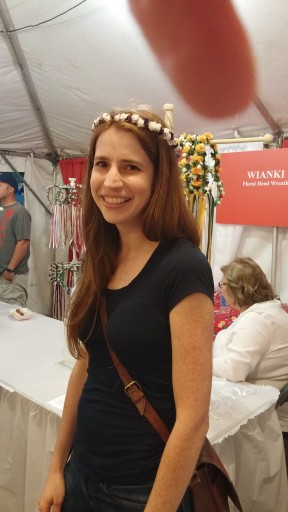 Guess I didn’t need to hunt for characters so much as be a character. It helps to have a good sport for a friend, too. 🙂

So, overall, a good day. I learned photographing people is best left to professionals, and that Polish Fest should be visited at midday, when paczkis are freshly filled with gooey yumminess and polkas echo up and down the midway.

In the meantime, I’ll wander in the twilight, sharing a breath of lake air with monks and yearning for the sugary delights of far-off lands.

A Writer and His Reading

Ideas on writing and baking

Tales Of A Scottish Lassie

I Lang hae thought, my youthfu' friend, A something to have sent you, Tho' it should serve nae ither end Than just a kind memento: But how the subject-theme may gang, Let time and chance determine; Perhaps it may turn out a sang: Perhaps turn out a sermon. - Robert Burns

Wherever you go, go with all your heart. Confucius

Thrills, Spills, and just a dash of Romance

One writer's experiences, and battles with words