A lovely summer day, the kind of day that inspires so much hope and happiness in little ones, especially when:

“We go to the carnival today!”

Biff said it the moment I opened the boys’ door that morning. He talked about it all through breakfast, all through the agony of waiting for Grandma to come at lunchtime. He plowed through his food in a few minutes and literally hung by the door. He peed on command in the potty, found his shoes and sat without kicking.

We met my kid brother and his family, up from Arizona to visit relations, for an afternoon of kiddie rides and giggles. Yes, this the same place I wrote about previously that grips a peculiar air during the off-season, when all is metal bones and concrete in the cold.

But in summer’s light, sweet air, the heebie-jeebies are forgotten. Smiles abound.

Until, of course, this:

It was one of the last rides of the afternoon. Bash had been throwing tantrums, while Biff had been an excellent listener. I felt he deserved a reward, and could pick the next ride. Of course, he picked the ferris wheel. Why not? We had ridden it last year without  trouble. He jumped about in line, beyond stoked, and sat quite still in his seat, enamored with the heights. I, of course, was petrified that he’d make a sudden move at any given moment, and gripped his arm and shoulder the entire ride.

And then, we were back to the ramp, our turn done. I let go.

I let go, and he ran from the bench and fell off the ramp and his feet in the air and head down and I heard the screams and saw the blood and thought my boy, I killed my boy, my boy is dying right in front of me because I let go.

I cry even now writing this.

I gripped him and the towels on his head as people swarmed to me, to us. Bo got Bash and Blondie to my relatives and ran over. Ambulance, a policeman, it all…and me crying and pleading for it to be okay and I was so sorry because I knew if I had held on….

Biff calmed down far, far sooner than I, I think because a policeman was talking to him for the first time. Biff asked him his name, what he was doing there, did he want to ride the ferris wheel, too? My little Biff spoke so smoothly without stopping that the EMTs and officer thought the chances of concussion too small to be a concern. After a stupidly long wait at urgent care where even Biff tells me to “Calm down, Mom,” we came home to see the others going on a short walk.

What did Biff do? He launched himself from the car to run down the street after them.

He tried to run alongside the cars as family departed.

He jumped from furniture because he was Superman.

He head-butted Bash because, brothers.

With me, holler-pleading all the while, “Didn’t you learn ANYTHING from those stitches?!?!”

We get very set in our ways, we writers. Something works for us once, and superstition swells about it. If people liked the prologue we wrote that one time, let’s always use it. I wrote my best dialogue in that chair; therefore, I’m annexing it to my workspace. I only get good ideas at dinner. I can only write in complete silence. These ruts form, and form quickly.

But life doesn’t “do” ruts. The other prologues kinda suck. The chair breaks. The new work schedule has you on the job right through dinner. Kids dare to age and, like, need stuff.

As writers, we’ve got two choices: despair, or crack on. I’ve done the despairing, and let me tell you, it does you about as much good as a fall off the ferris wheel ramp. What does cracking on mean? It means taking what you’ve learned from your environment’s changes and adapting. It means learning to write with noise, to write in any position, to try new story structures and styles. It means trying, learning, growing, just as our characters do when conflict rises in their worlds.

It occurred to me while pulling Biff and Bash apart yet again that experience and learning do not always go hand in hand. It seems to, because in books that’s how writers so often have it work out. It makes the plot all nice and tidy, don’t you know. Well, you don’t know, because sometimes, human nature just doesn’t jive that way. Bash, who got stitches in June from running around the house and crashing into a wall’s corner, continues to run around the house. Biff…well I told you about him. Even Blondie, who got stitches last year from jumping on the bed, continues to jump on furniture (sans beds) and trampolines any chance she gets.

That night after urgent care, with me still in tears wondering how, how can we keep these kids from killing themselves, Bo said, “With these guys, the only way they’ll stop moving is if they can’t move. It’s going to take a broken limb. Or two. Or probably three, knowing them.”

And I think we need to remember that our characters’ lives can be like that, too. Job wasn’t tested with only the loss of wealth, or only the loss of a loved one. He lost his entire family and all he possessed, even his health, before God blessed him anew. When a character totally alters over something piddly, we as readers call it out because we know human nature doesn’t switch so suddenly between “nice” and “jerk.” It evolves in time, and time rarely paces problems for our convenience. So why should we make it convenient for our heroes? Rather a boring read, I’d think.

Though I admit, I wouldn’t mind some boring days on the mother-front, such as yesterday, when all three were content with little super-hero cars built from Legos. I watched Biff fly the little Superman around and make friends with Doomsday. I remembered his feet in the air, the blood. I grabbed him, kissed his head.

And found myself chasing him down the hall because he’d grabbed the helicopter Batman from Bash’s side of the table and was now laughing maniacally from the bathroom with Bash ready to inflict fists of vengeance. Biff’s is a spirit that simply cannot be broken.

And yes, despite everything, I love it. 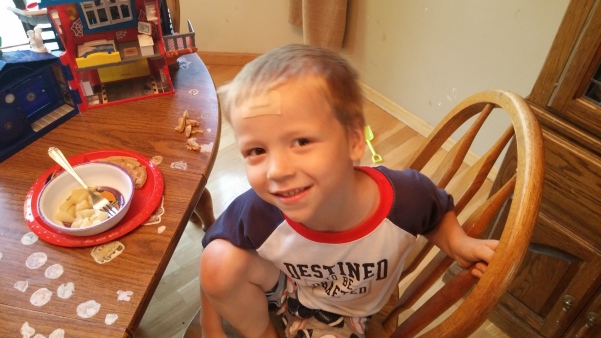 51 thoughts on “A #summer of #writing & #motherhood, part 2: Experience Does Not Always Inspire Learning.”

Scent of a Gamer

From the computer to the tabletop, this is all about games. Updated each week-end.

Resources for women writers, interviews with female authors & reviews of books by women

We are the Anti-MLM [multi-level marketing] movement

The truth, my Paparazzi Accessories Experience

The Story of my Experience with the MLM