Snagging readers is always one of the greatest challenges writers face. First fifty pages nuthin’. We gotta grab readers in the first five pages. Heck, if we can’t grab an agent or publisher with the first five sentences, we are out of luck.

Holly Black establishes just enough intrigue within her first lines of The Cruel Prince to hook readers and keep’em on the line until the last page. Let’s dissect a few of these opening sentences, as well as the entire first chapter.

On a drowsy Sunday afternoon, a man in a long dark coat hesitated in front of a house on a tree-lined street. He hadn’t parked a car, nor had he come by taxi. No neighbor had seen him strolling along the sidewalk. He simply appeared, as if stepping between one shadow and the next.

Inside the house, Jude sat on the living room rug and ate fish sticks, soggy from the microwave and dragged through a sludge of ketchup. Her twin sister, Taryn, napped on the couch, curled around a blanket, thumb in her fruit-punch-stained mouth. And on the other end of the sofa, their older sister, Vivienne, stared at the television screen, her eerie, split-pupiled gaze fixed on the cartoon mouse as it ran from the cartoon cat. She laughed when it seemed as if the mouse was about to get eaten.

The first four sentences take care to show something abnormal is in the works. While the first sentence of “a man in a long dark coat” sounds ominous, it’s a common sort of ominous–oh no, a dude in a coat. Aaaaah.

The next sentence plays upon our reality’s norms and begins to trim them off: no car, no taxi. There go the typical, nondescript forms of transportation. Black’s not going to insult our intelligence and list other vehicles not used, like RVs, semis, and so on. If my son Biff’s taught me anything, it’s that kids will notice any vehicle bigger than a car, and they will make a big deal about it. “Mommy, a truck! Mommy, a bus! Mommy, an RV!”

The third line continues to nullify yet another assumption: he didn’t walk there. If Black can say no neighbor saw him “strolling along the sidewalk,” then that means neighbors are currently outside to witness such things.

But no one did. Which means that when “he simply appeared,” he literally did just that.

Now that is abnormal.

In the next paragraph we meet our protagonist Jude and her two sisters. Black has situated this family in a very typical setup: snacking and watching television.

It is this sort of normal the man of the long dark coat penetrates.

I don’t have to share the rest of the prologue with you to know there was something abnormal in Jude’s normal–her elder sister Vivienne has “eerie” split pupils. As the narrator explains, Jude and her sister accept this without question; after all, they’re identical twins, which is weird enough. For them, this is normal, and therefore requires no further explanation.

But they do get an explanation with the man’s arrival.

He is not human.

He is also their mother’s first husband, and Vivienne is his daughter. Jude’s father tries to fight him, and dies. Jude’s mother tries to run, and dies.

He takes all three girls back to his home in Elfhame. 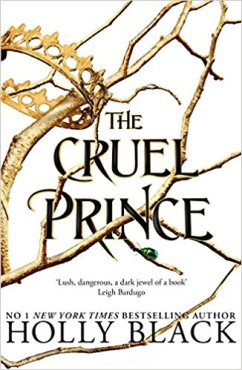 Now here Black makes an interesting writing choice: while the prologue is given in 3rd person past, Chapter 1 shifts us into first person present.

In Faerie, there are no fish sticks, no ketchup, no television.

(Told you not to groan.)

What good is a one-line chapter?

For starters, Black’s story isn’t about little kid Jude and her sisters. In Chapter 2 we learn ten years have passed since General Madoc killed their parents and brought them to his home. The Cruel Prince will share the tale of these girls finding their place in–or out–of Faerie.

Ten years is a HUGE amount of time to cover in any book, let alone a sentence. So let’s see what Black did to help us make that leap.

First, she establishes the time with “are.” The events of the prologue are done. The narrator’s in a new time.

What place? “Faerie.” For all the variety of worlds made about fairies/faeries, we do tend to make similar assumptions about what these magic folk don’t have: cars, for instance, or computers. Black builds on this concept–ruling out what isn’t in the world before building on what is–by listing the three simple things that symbolized the normal of Jude’s life: fish sticks, ketchup, television.

“Television” clearly encompasses technology of all sorts, but for a kid, no tv is, like, huge. It’s a primary resource for entertainment, education, distraction. It’s challenging enough to limit a kid’s screen time. Can you think of completely removing the tvs, computers, tablets, phones, and all the rest out of your life, let alone a child’s? Let that sink in. Now you appreciate that dose of culture shock for Jude and her sisters.

“Ketchup”–so often associated as the go-to dipper for kids. They’ll draw pictures in it, squirt each other with it. Adults can show their age if they like by using more “sophisticated” fare like oils, glazes, marinades, or sauces constructed with food processors and farmer’s markets and sweat, but if a kid’s got the choice between some organic garlic beet radish kale compote and “ketchup,” what do you think he/she will take?

Same with “fish sticks.” Microwaved, no less. One of the staples in a family’s fridge, fish sticks are a primary example of the pseudo-nutrition parents like to use to keep kids’ stomachs placated. Heck, I used’em for Blondie last night. (Biff and Bash don’t like them. Hmm, maybe they’re from Elfhame. It would certainly explain their ever-warring natures…) The easy, go-to processed food kept frozen by technology and heated at the click of its buttons is only memory to Jude.

By grouping this little trio of food, pleasure, and entertainment in the normal of Jude’s young life, and emphasizing with three No’s that these do not exist in her new normal, Black successfully jars readers out of Jude’s childhood and shifts them into the plotline for The Cruel Prince, told by Jude with intimate immediacy.

If your story needs a setup, consider how much you can pack into a single line. Think about what will separate this setup from the rest of the story, and what voice is best suited to prepare readers as well as engage them for the story proper. Do not think you must provide a detailed summary of the time passed over between setup and story; rather, consider what can symbolize that which is now lost, or gained, or transformed. Let that symbolism speak the necessary volumes for you while you lure readers into the shadowy realm that is Chapter 1.

50 thoughts on “#lessons Learned from @HollyBlack: Start the #storytelling with #writing the departure from the #characters’ normal.”