I may roll my eyes, but I concede. Every kid’s going to have their favorite song about hot dogs, right?

Not what you were expecting, I wager. But that sax will set Bash a’boppin’ every time. Even Biff’s  bear-friends Mel and Grand-Père will dance to this tune.

(For the record, Blondie is tolerant, but would prefer her sweet pop songs. Or AC/DC. 7 going on 17, I swear…)

If there must be a song about hot dogs in my house, then I’m glad it’s by one of the smoothest bad-ass composers of the twentieth century,  Lalo Schifrin.

This man is a living institution, a game-changer. He started composing in the 1950s and hasn’t stopped since. Seriously, this man is STILL writing music. He’s created for television shows like The Man from U.N.C.L.E.  and Mission: Impossible, films like Cool Hand Luke and Kelley’s Heroes. His score tears down the road with Steve McQueen in Bullitt. When Bruce Lee kicks ass in Enter the Dragon, Schrifin’s kickin’ it right along with him. When Chris Tucker and Jackie Chan go after the mob, Schifrin is…hang on, he did ALL the Rush Hour movies? 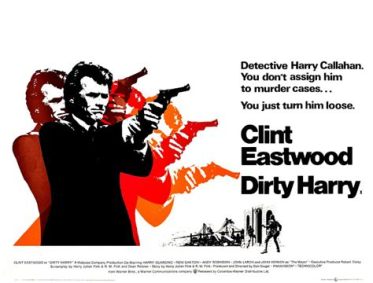 Though Schifrin supposedly scored four of the five films (I have a very stubborn conspiracy theory about Dead Pool, but I shan’t bore you with it here), the groundwork themes are to be found here, in the first film. Not only does Schifrin capture both environment and hero in Dirty Harry’s theme, but also madness and villain in Scorpio’s.

“Mommy, is this Charlie Brown music?” Biff asks every time this is on. I was stumped at first, but then realized Biff’s actually making a pretty decent genre connection: Vince Guaraldi’s compositions for the Peanuts specials are jazz in nature. Schifrin uses what Nick Redman defines as “urban jazz-funk.” Percussion is the star here, with the bass guitar a close second. The snare and bongos weave a layered energy throughout the theme–feet walking, cars honking, countless rhythms confined to this one hard space. The strings change the mood beautifully too, from the uneasiness of the violins to the steady groove of the basses and cellos. My favorite moment, though, is just around the 3:00 minute mark, when all falls away but the bongo and keyboard while Dirty Harry takes in the crime scene. For all the raw energies moving through the city, this halt to stop and think under a soft harmony makes me wonder if there’s more to this gritty cop than meets the eye.

With Scorpio, it’s aaaaall about what’s going on inside him.

Just listen to that first minute: deliciously unnerving. The whining effect that makes your ears twitch, the off-beat percussion–THIS, the percussion, is one of my favorite elements. Scorpio has no definable rhythm. He moves, he waits, he watches victims, he waits. The percussion only grows when he’s chosen a victim.

And the voice–oh, that voice! My daughter hates this song because the singer freaks her out. The singer’s sweet dissonance calls out like a siren for Scorpio to make his next kill; hell, you see that gleeful pleasure on his face when he chooses his next victim for a sniper shot.

But then comes the fuzz petal and bass, and a steady percussion announces a new rhythm: there’s law on the scene. The voices multiply and swell as Scorpio runs. The track climaxes with, of all things, a shaker. Lalo Schifrin makes a shaker sound totally bad-ass. Who else can do that? No one, I say!

Even actor Andrew Robinson, who played Scorpio, understood the power of Schifrin’s music. In one documentary (watched by Bo, who watches any and every documentary about favorite films), Robinson described meeting Schrifin by chance and thanking him for “making that character memorable,” and thereby giving Robinson a career. Robinson’s portrayal is powerful, yes, but the sirens, the drums, the guitar–they bear witness to the Scorpio’s outsides AND insides without any extra visuals. We feel this villain’s psychotic nature thanks to Schifrin.

We feel the city’s neon grit thanks to Schifrin.

We feel the hero’s inner calm amidst blood splatter and shell casings thanks to Schifrin.

Some stories require fun whimsy, or epic sweeping beauty, or the quiet dance of curious love. But for the streets of rundown hot dog stands, pawn shops, and ma-and-pa groceries, for the tattered scroungers and their shopping carts of cans, for the hunter flicking his cigarette into the gutter outside the alley where they, the notorious they are known to hang out….for the streets stained with the fluids of human and machine…

Look no further for inspiration than Lalo Schifrin.

Bringer of Nightmares and Storms

From a dark home, To an empty soul, A hurt heart, Makes a writer gold.

Book reviews and previews from an avid reader!

struggling through one book at a time

stay off the mountain

A Barbarian in Gentlemen's Clothing

Manhood is a Journey

BOOKS FROM DUSK TILL DAWN

Each night I TRAVEL THE WORLD, I LIVE IN THE MIND OF KILLERS AND WALK AT THE SIDE OF HEROES