How the heck am I supposed to cheat with the good creamer when Bo’s home from work?

It’s taken a lot of stealthy sneakery, let me tell you. I put him on tooth-brushing detail before the school bus came. I’ve waited until he’s checking something on Facebook. I’ve listened for him to shut the bathroom door.

Aha! Creamer! It’s mine, I tell you, MIIIIINE!

And then he had to go into the kitchen to make his lunch. Can’t he cook somewhere else? Use the grill, most of the snow’s melted by now.

Dammit, now I gotta use the cashew milk.

So why is Bo off of work? Biff and Bash have a concert this afternoon during their school day. It’s themed “All Things February,” only without anything Valentiney for some reason. Who wants to sing about Valentine’s Day when you’ve got American presidents, groundhogs, weather, and nonsense words like “skinnamarink”?

Buuuut it’s a bunch of kingergarteners, so therefore it will be cute. So long as they’re not singing about poop or farts, I’m fine.

What, don’t your kindergarteners sing about poop and farts? Don’t your third graders? Mine do!

No, I’m not subjecting you to that nonsense. If you want a taste of their humor, go check out the best-selling Middle Grade comic series Dog-Man. 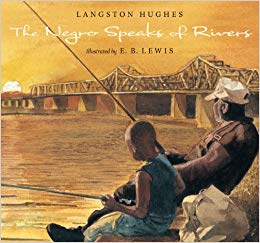 In the meantime, I’m trying to broaden the kids’ horizons with a little poetry. I found a gorgeous picture book edition of “The Negro Speaks of Rivers” by Langston Hughes. Every line receives a painting rich and passionate, so you move slow through the poem, savoring every line.

Langston Hughes is one of my favorite poets. Reading him is always a journey of multiple senses, twisting and turning down the white-space of the page, feeling both the cut of the language and the long echo of the visual.

Just listen to this.

“When dawns were young”…what a magical phrase, infinite and divine.

Not that my kids would listen.

“Look, Mommy, I made Bumbleebee fart on Starscream!”

Give’em time, Jean. They’re kindergarteners. You’ll get them there in time.

Go read Langston Hughes this month. Read him out loud, too, so others can be touched by his language.

Buy my book, too, or you can read my FREE fiction here or here, but only after you read some Langston Hughes.

Poetry requires a deftness with space and language, a skill akin to lacing. Lacing needs sure fingertips, careful measurements, knowledge of the spaces as well as the threads, their knots, their weaves, none of which I’ve fully understood.

Oh, I’m not putting down prose–a great book requires all these things, too. But there’s something about the poetic line, that tight little collection of words that must balance just-so with the empty space surrounding it, that is needed more in poetry than prose. Studying such rich handfuls of language can only better the prose writer, inside and out.

I can still remember the first poem that shook me. Not a hymn, not Scripture–pshaw, I grew up around that stuff. For the first couple decades of life, that stuff  sat next to the peanut butter, mixed into the pile of bills on the kitchen table, hung on the hook in the hall. Just another part of the day.

For the first time, I was in a place where no one else knew my family. I wasn’t being judged by the actions of my parents or brothers. I was me.  I finally embraced my passion to write and yes, I dared choose story-telling over music. I worked to understand that which mattered inside me.

For the first time, I spoke to an adult, the college chaplain, about The Monster. His hands. My despair.

Later that same day I was trapped in a poetry unit of a lit class. I didn’t get any of it: meaning, syntax, meter. Hell, I was barely listening. Blah, blah, sentence fragments words, blah, blah. I just wanted to leave, and deal.

Next in our anthology was Langston Hughes’ “Mother to Son.”

Well, son, I’ll tell you:
Life for me ain’t been no crystal stair.
It’s had tacks in it,
And splinters,
And boards torn up,
And places with no carpet on the floor—
Bare.
But all the time
I’se been a-climbin’ on,
And reachin’ landin’s,
And turnin’ corners,
And sometimes goin’ in the dark
Where there ain’t been no light.
So, boy, don’t you turn back.
Don’t you set down on the steps.
‘Cause you finds it’s kinder hard.
Don’t you fall now—
For I’se still goin’, honey,
I’se still climbin’,
And life for me ain’t been no crystal stair.

Never had words burrowed into me, gripped the pit of me and twisted, fucking hurt as they twisted and pulled–because they were trying to right me. I took that poem to the dorm, and bawled for a long, long time. I still cry every time I read it.

Of course all writers want to grip readers. But there are those, like Hughes, who do far more than entertain, or inspire. They transform us. That transformation may be one of the bloodiest experiences in our souls, but we are, yes we are, the stronger for it.

I studied literature for a summer at University College Cork. I didn’t really fit in with those who spent every lecture drinking alcohol in soda containers and flying to London on weekends to go clubbing. Nor did I fit with the academics who’ve read Ulysses and/or Finnegan’s Wake twice and sat on the dormitory’s stoop to pontificate nature, economy, philosophy. I spent much of the off-hours alone, wandering Cork, reading Seamus Heaney, doing my damndest not to be a dunce.

I can’t tell you which poem fell upon me me first. “Blackberry-Picking,” I think.

Late August, given heavy rain and sun
For a full week, the blackberries would ripen.
At first, just one, a glossy purple clot
Among others, red, green, hard as a knot.
You ate that first one and its flesh was sweet
Like thickened wine: summer’s blood was in it
Leaving stains upon the tongue and lust for
Picking. Then red ones inked up and that hunger
Sent us out with milk cans, pea tins, jam-pots

Pardon me for being evil, and breaking his stanza. I want to pause it here, because I can feel the call-back of the memory in these lines.
The title seemed simple to me. I should be able to understand a basic description, right? And being the Midwest girl that I am, raised in a farming town before getting shuffled to Milwaukee because God said so, I felt like I could even–gasp–write almost-intelligently about it. Harvest. Rural life. Childhood innocence. Yay, I understood something!

Then something else happened, something that for all my writing aspirations, I had never really considered:

Language.
The first two lines form a smooth sentence, a prosey sentence. But line 3 comes along and says: “glossy purple clot.” Suddenly I am holding something, vivid and bright. Yet “clot.” Why “clot”? Who associates “clot” with delicious fruit? We want blood to clot, I suppose. And there you have it, lines 5 and 6, describing sweet “flesh” and “summer’s blood.” Line 7 builds to “lust” and–hey! The sentence is broken! The space urges me to line 8 where capitalized, separated by the rest of the line with a period, comes the act, the want, the purpose: “Picking.”

Every word Heaney shares connects with one or more senses:

Where briars scratched and wet grass bleached our boots.
Round hayfields, cornfields and potato-drills
We trekked and picked until the cans were full,
Until the tinkling bottom had been covered
With green ones, and on top big dark blobs burned
Like a plate of eyes. Our hands were peppered
With thorn pricks, our palms sticky as Bluebeard’s.

The “briars scratched.” The “wet grass bleached our boots.” I read these lines out loud on the sidewalk outside a bookstore, the buzz over the latest Harry Potter deaf on my ears. The way “briars,” “bleached,” “boots,” roll in the mouth, berries all their own. “Like a Plate of eyes”–a return to the flesh imagery! Emphasized with the association to the murderer Bluebeard, who hoarded wives as the young characters do berries:

We hoarded the fresh berries in the byre.
But when the bath was filled we found a fur,
A rat-grey fungus, glutting on our cache.
The juice was stinking too. Once off the bush
The fruit fermented, the sweet flesh would turn sour.
I always felt like crying. It wasn’t fair
That all the lovely canfuls smelt of rot.
Each year I hoped they’d keep, knew they would not.

Gah! Not just “grey,” or “silver,” or “fuzzy,” but “rat-grey.” Immediately, we think of pestilence, unwanted, toxic growth. More of such vivid sounds that we can taste against the roofs of our mouths and yet see, all at once: “fresh berries/byre” or “fungus, glutting.” Action moves quickly with the imagery: “fruit fermented”…”sweet flesh would turn sour.” Three words transform what is loved to what is lost.

And the ending of the poem…we have this sort of short “o” sound three times in the last four lines: “sour,” “rot,” not.” “Sour” creates tension on two fronts: that growling “r” carries on in “fair,” the positive, the hopeful, only “It wasn’t fair,” was it? And the short “o” of “sour” echoes in the harsh monosyllabic phrase, “smelt of rot.” Damn, such a slamming there. A child, stomping his boots at the unfairness, the inevitability despite the hope the narrator knows is in vain, yet holds in his jars and cans every year: “knew they would not.” The whole last line is monosyllabic, too, words falling like so many spoiled berries one tips from the can onto the ground.

I carried Heaney and all these thoughts back with me to the dorm. No, no tears today, but another epiphany, yes. For the first time, I wasn’t looking at words for what they achieve as a whole. Of course, “Blackberry-Picking” is a story in its own right, complete with characters, conflict, climax. But so much is accomplished in the little things here, too.

Every word written carries a rhythm. Listen with every sense. Capture what you can.