When we think “cozy mystery,” we think of a manor, or someplace isolated, with a limited cast and one, maybe two murders in a tight amount of time. Subtle clues that we didn’t understand come to light when the detective gives his Great Reveal in Act III. My study of The Mysterious Affair at Styles fulfilled such requirements, as do other major Agatha Christie novels, like Murder on the Orient Express, Cat Among the Pigeons, or Murder on the Nile.

So let’s not talk about any of those and look at A.B.C. Murders instead.

This particular mystery takes place in and around London. The victims are not known until they’re dead. The killer has no face–in fact, the only clue that connects the murders is an A.B.C. railroad timetable. That’s the mark of a serial killer. The cast morphs and sprawls with each death.

All the while Poirot’s little grey cells ponder over long periods of time.

Now I will admit to my own little crime: I am writing this post before finishing the book. I read it once as a child, but, as suggested by Damien Walter, I wanted to give A.B.C. a serious study for craft’s sake, starting with that all important-topic:

In my earlier study of The Mysterious Affair at Styles,  I noted just how quickly Christie gets the story moving in that first chapter with character introductions. I wondered how every line’s got to count in a mystery, be it for the character or the plot. This time, I decided to see what Christie accomplishes on every single page of A.B.C. Slow work, but already I find it most worthwhile.

Rather than give you my notes–well, here’s some of them. Now go and be thankful you don’t see my handwriting on a regular basis. 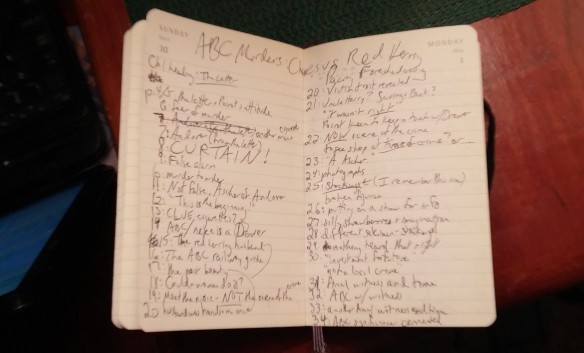 Chapter 1’s header already engages us: “The Letter.” Consider the book’s title: Are we talking about the letter A? Correspondence was still a primary form of communication–are we talking about a posted letter? By page 4, we find out it’s both: the first note from our killer, taunting Poirot with a murder to be committed in the city of Andover. Hastings, of course, does not take it seriously, but Poirot does. On page 9, the killer’s predicted day comes and goes, and Hastings calls it a false alarm. By page 11, we learn differently. Come page 12, we get one hell of an eerie statement from Poirot:

“This is the beginning.”

Every single page contains a clue of sorts: testimony from a witness/suspect, scene of the crime, Poirot’s critique, and so on. Trust me, I looked for a page that could have been cut for its insignificance. As of nine chapters, we have two murders, two different groups of suspects and witnesses, two different towns, two different inspectors.

On page 24, for instance, Poirot took time to study the only three photographs in a victim’s apartment. You just know that’s going to be useful later, right? On page 25, Hastings tells us what he sees in the apartment; no overlap, and it sounds mundane, and yet in a mystery everything counts, so one of those items just has to stand out sometime.

By page 37, Poirot has met with the first victim’s family and usual suspects, then visited the scene of the crime. At this point, all leads to dead ends, and Poirot tells Hastings that there is nothing that can be “done” until the murderer strikes again. Hastings, being British, loathes this not-doing-anything, and spends page 38 lamenting Poirot’s clear loss of detecting powers. Sounds pointless? Not at all. The page puts doubts in reader’s mind as to whether or not Poirot really can solve this crime. For those who have read from Hastings’ perspective before, we know he’s not a reliable narrator, yet we can’t help but feel our faith shaken.

Then comes page 39, and another letter predicting murder with a B. Christie breezes over weeks of time by distracting us with Hastings’ doubt. From pages 40-42 we get the new victim, the conflict with a new inspector, and the increase in doubt of Poirot’s abilities.

By page 48, we start to see at least one connecting thread between victims thanks to Poirot. No, not the railway guide, that’s the obvious one left by the murder. Poirot remarks on the beauty of both victims. Why? Hastings doesn’t think on it, passing it off as something foreigners do. You’d think Hastings would know better by now…Anyway, that makes nine chapters. 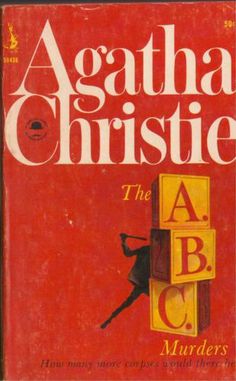 tidbit in. Maybe she counted, maybe not. But I could certainly see why The New York Times said that this book is “The very best thing Agatha Christie has done”–at least that’s what it says on my edition, a 17th printing (SEVENTEENTH!) from 1967.
Christie lets no page go to waste. Only one page of genuine reflecting in nine chapters, and not general reflecting, either–it has an underlying agenda. Setting details are given quickly, almost waved aside:

“A dingy little place…A commonplace little shop, one of many thousand such others.” (23)

“Situated on the sea front, this was the usual type of small tea-room. It had little tables covered with orange-checked cloths and basket-work chairs of exceeding discomfort with orange cushions on them.” (45)

Did I mention the one departure from Hastings’ point of view? Chapter 2 focuses on a man named Mr. Alexander Bonaparte Cust? A man in a “shabby bedroom,” who smokes “cheap cigarettes,” and cults a “railway guide” and a “typewritten list of names”? We get this on pages 6-7.

He’s not been mentioned since.

But cheap cigarettes and railway guides sure have.

Such little things, and yet because of this single departure  from Hastings we hunt through the little details Christie places on every page, measured and sprinkled like chocolate chips for muffins. Too many and they’ll just spill off and melt on the pan. Too few, and the children will gripe and revolt and demand better muffins. (What, that doesn’t happen in your house?) Measuring out the placing of details gives readers reason to read not just the good chocolatey bits, but the whole thing. Give readers a sweet on every page, and they will not walk away until you’re story’s devoured completely.

31 thoughts on “Lessons Learned from Agatha Christie: Pack it on Every Page.”