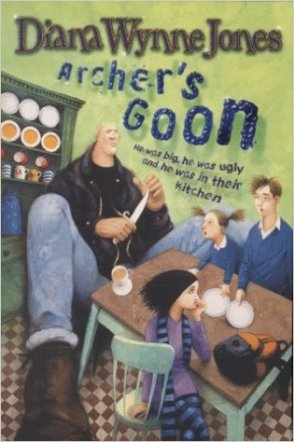 Archer’s Goon is glorious fun on many levels. Not only does all the magic occur in a typical city—the magic also manifests in typical fare, like the sudden appearance of go-go dancers or surveillance through light bulbs. The magic is exposed and eventually beaten out not by a single hero, but by family, forced together by magic and determined, despite their many dysfunctions, to stick it out.

Love has a mixed effect on three and a half characters: Fifi, the college student living with the Sykes; the Goon, who is determined to get 2000 typed words out of Mr. Sykes; Archer, one of the wizards who controls the city; and Awful Sykes, age 8.

Awful and her elder brother Howard first discover the Goon in their kitchen. He has come to collect the 2000 words Mr. Sykes always writes every three months. Why does he write them? No idea. But the unknown boss who’s required them is angry he hasn’t received the latest installment, so if Mr. Sykes doesn’t rectify the situation their lives will be in trouble. Both Mr. and Mrs. Sykes take the Goon’s presence in stride, but Fifi, Howard, and Awful can’t stand him. Yet despite the poor first meeting, Awful and Goon make a tentative connection over, of all things, a puking contest. (Well she IS 8, and she didn’t earn the nickname Awful for nothing.) Fifi does her best to help Howard rid the house of the Goon, but to no avail: mystery arises over who gets Mr. Sykes’ words and how he/she uses them, and no one’s more curious than the seven wizard siblings who run the city.

Each wizard goes after the Sykes in his/her own way. Dillian, the beautiful sister who runs the police, admits to the theft and still tricks Howard, Fifi, and Awful to leave her home without them. This is the first time where Fifi’s looks require the reader’s attention:

“Oh!” Fifi said. “I’d give my ears to look like Dillian! Wasn’t she glamorous!”

No, I’m not saying physical appearance is everything, but 13-year-old Howard’s note of Fifi’s appearance makes it sound like Fifi couldn’t figure into anyone’s desires like that. Even the school boys in Chapter 2 and 3 like to mock Howard for walking around with Fifi like she’s his girlfriend.

But Fifi does become an object of desire to no less than two characters: the Goon, and Archer.

Eldest of the wizard siblings, Archer meets Fifi with Mr. Sykes and the kids when Sykes thinks Archer is the one who’s wanted the 2000 words. An argument erupts between Sykes and Archer, but Fifi remains bashful, speaking only in whispers. Chapter 5 marks the beginning of Fifi’s shift from a supporter of the Sykes to a doleful, lovelorn devotee to Archer. She still helps Howard and Awful with home things, like learning how to live with marching bands going eternally up and down the street and leaping over the moat around the house and silencing a massive drum kit and stealing food all because of magic. Every wizard who demands Sykes write for only him/her only drives Sykes’ heels further and further into the ground. His defiance against Archer, though, is blasphemy to Fifi.

While Fifi fawns over images of Archer, the Goon has fallen for Fifi. Yup, he’s still there, this monstrous tree of a man, and has actually settled into the household because, well, he’s supposed to get those 2000 words. Chapter 6 ends with the Goon’s confession to Howard about his feelings for Fifi, feelings which make him a bit difficult. He won’t stop staring at her, and he only scares her when he tries to help her survive the chaos about them. When Archer takes Fifi out on a date, the Goon’s behavior worsens.

That day the Goon dismally drew a large heart in purple crayon on the kitchen table and sat throwing his knife at it, over and over again. The heart was shortly covered with dents, but it made no impression on Fifi’s heart in any way. (p. 153)

When Fifi moves out to marry Archer, her shift in alliance is complete. Love has taken someone we initially considered a protagonist and turned her antagonist. The Goon’s dejection makes him so pitiable the Syke children feel for him and are a bit nicer to him. So, the one readers presume to be the antagonist now seems to be a protagonist. Or is he?

Turns out the Goon is not just a goon—he’s one of the wizard siblings, and he’s livid with the only wizard sibling we have yet to meet for trapping the rest of their bizarre family in the city. He attempts to restrain the Sykes family in the sewage treatment plant until the last wizard sibling reveals himself and owns up, but the Sykes manage to escape. Howard decides to hunt down this last wizard sibling himself so his family’s persecution will stop: Mrs. Sykes has grown gravely ill, and even though Awful is awful, she should not have to fear being beaten up by wizard-run gangs.

Turns out Howard is the last wizard sibling. In a twist only Jones could pull, Howard realizes his older self has hidden away all sorts of magnificent technology in the future; he also realizes his older self was a pompous, self-centered jerk. When he tried to get back into the present, he aged backwards into a baby and was found in the snow by the Sykes, who adopted him. He grew up in a loving family. He grew up knowing why family mattered. And knowing this, Howard did not want to re-grow up into that pompous jerk. The Goon is really his brother Erskine, who’s been trying to make Howard remember so Howard will destroy the spell that’s kept all the siblings in the city. And, after all the years apart, he wants to be brothers again.

During the Goon and Howard’s visit into the future to uncover Howard’s true identity, Awful stumbles in and ages herself.

Awful grew as [Howard] watched. By the time she was on the third step she was a large, fat schoolgirl in a maroon uniform, with a sudden strong look of Shine… She heaved up onto the fourth step. There she was suddenly skinny and Awful again, but nearly six feet tall, with a scornful grown-up look. Then she came up on to the marble floor and became a student about Fifi’s age, but much better-looking.

[Howard] gasped. He had no idea Awful would grow up that pretty. Beside him, Erskine’s eyes popped, and a great admiring grin spread over his little face.

Now no, Awful launches herself back down the stairs and returns to her proper child state, so nothing happens between Awful and the Goon. However, after the bad wizard siblings are shot into space, the last few paragraphs allude to a very strong possibility…

Behind them Erskine luxuriously stretched long Goon arms. “Go and travel now. See the world,” he said. His eyes slid to [Mrs. Sykes] pleadingly. “Come and see you every year?” he asked.

Howard looked at Erskine warily. He rather thought Erskine’s eyes had flicked on to Awful after that.

It was quite possible that Erskine would come back one year, saying he had taken a look at the world and decided he would like to [conquer] it. When he did, he would offer Awful a share. (p.323-324)

So, after all the Goon’s longing, he doesn’t get the girl…yet. Readers are left to bet the Goon would make a strong play for Awful when the time was right. Considering her terrible antics throughout the story, readers can also bet Awful wouldn’t say no. Why don’t we get this in the story? Because such a scene has to take place in the future. Yes the characters literally walked into the future at one point, but this scene requires some living and maturing to happen first. That stuff’s not relevant to this specific story arc, which means the Goon/Awful connection must be considered an eventual romance. I can recall at least three other Diana Wynne Jones books where the “eventual romance” is foreshadowed: Year of the Griffin, House of Many Ways, and Wild Robert. I could also count The Many Lives of Christopher Chant on a technical level because the main characters do not become romantically involved, but as this book’s a prequel inside the Chrestomanci series, readers already know romance is on the way.

When writing for Young Adult or New Adult, there is this instilled Romeo/Juliet need: our main character MUST find his/her other half; otherwise, life just isn’t worth living.

Bugger that. Maybe your protagonist needs to grow up by dealing with life solo for a little while. Sure, hints of love down the road aren’t bad, but why thrust them into the story like a kid smashing an action figure against a Matchbox car? The dude’s not going to fit, kid, let it go. The same goes for writers: sometimes there just isn’t room. If the story’s fun without love, don’t force it in. If you want love to have a little fun of its own out of the spotlight, let it, and watch for the fresh twists in character that will only enhance your readers’ experience.