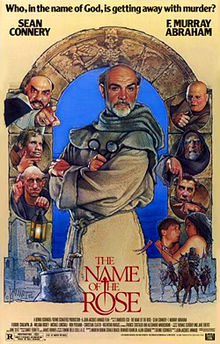 I’ve always been antsy about chapter titles. They always seem to have a touch of spoiler to them, such as “Chapter 19, in which Sophie expresses herself with weed-killer” from Howl’s Moving Castle. Thanks a lot, Diana Wynne Jones, now I won’t be surprised when the protagonist gets emotional as she gardens. (I am a very cranky reader before dawn, which is rather inconvenient for one whose reading time MUST take place before children wake.) So when I notice that Eco has them in this massive tome of his, I am skeptical.

The Name of the Rose is divided by days, and then by the canonical hours (Vespers, Matins, etc.). This fits: it gives readers a consistent sense of time and place, since the narrator Adso doesn’t always bother. Eco took great care for the breaks between hours to come with high tension, or tension releases.

Do the chapter headings help or hurt this tension? Let’s see. First one:

First Day, Prime: in which the foot of the abbey is reached, and William demonstrates his great acumen.

So they’ve reached their destination, and we get to see James Bond the Monk be smart. Well that’s a given. Nothing spoiled here.

I do like how Eco sometimes uses those headings to hook me for one more chapter:

First Day, Vespers: in which the rest of the abbey is visited, William comes to some conclusions about Adelmo’s death, there is a conversation with the brother glazier about glasses for reading and about phantoms for those who seek to read too much.

What are his conclusions? Who are the phantoms? See, I had to read a little further.

Yet these headings also forewarn me the characters are about to wander from the plot. While forewarnings are always appreciated, they do make me wonder why wanderings must eat up entire chapters, like this one:

Third Day, Terce: in which Adso, in the scriptorium, reflects on the history of his order and on the destiny of books.

Perhaps Eco has these chapters to screw with the reader. After I muck my way through a chapter of inner pondering, I read another heading, and think Great, he’s going to do it AGAIN.

Third Day, Nones: in which William speaks to Adso of the great river of heresy, of the function of the simple within the church, of his doubts concerning the possibility of knowing universal laws; and almost parenthetically he tells how he deciphered the necromantic signs left by Venantius.

Hang on—what was that on the end? We’re back to the mystery? (grumbles) All right, Eco, I’m on for one more bloody chapter of yours…

And sometimes, I can’t help but wonder if Eco puts the tension release into the headings as if to promise himself he gets to have that moment of release.

Third Day, Vespers: in which the abbot speaks again with the visitors, and William has some astounding ideas for deciphering the riddle of the labyrinth and succeeds in the most rational way. Then William and Adso eat cheese in batter.

I don’t blame him, not when there are other chapters like this:

Fifth Day, Nones: in which justice is meted out, and there is the embarrassing impression that everyone is wrong.

Overall, I must admit the chapter headings are quite useful. They are, in an odd way, a roadmap through the story—no. More like a treasure map, where one clue leads you to another, and while you can see the connections between the past clues, you can’t at all see where this new clue is taking you. Would I use chapter headings in this fashion? I honestly don’t know. I have a feeling I’d be too paranoid about giving something away, or trying too hard at wit and failing. Perhaps such chapter headings will fit your story, and provide readers with the reason to read just one more chapter. And another. And another.

Click here for more on THE NAME OF THE ROSE.