While I frantically prepare a presentation on Diana Wynne Jones for my university’s literary conference, please enjoy an essay on I wrote last year but never posted.

I distinctly remember the sensation of pins, countless pins, all over my body.

The pins held paper shapes to my clothes, and I’m sure my skin.

My grandmother and my mother titted and tatted over the pattern and its potential for Sunday best. I stared at the green shag carpet and thought of a great green plain that led to a waterfall there, where my grandparents’ blue comforter ruffled by the floor. To mountains, where the white metal closet door clanged shut as my grandfather got his hat and announced he was taking my kid brother for a drive to the park.

Sure. He gets to go to the park. I have to be a mannequin.

Grandmother lets out a loud arc of a laugh that verges on a bark, but there’s a music to it, too, like an old opera singer.

Grandmother laughs until my scowls subside. The scent of old cigarette smoke clings to her fingers as she removes some pins, HOORAY!…only to re-pin the back paper shape down a bit.

So I take off inside me across the green plains for the white mountains, and wait for life to be not-boring. 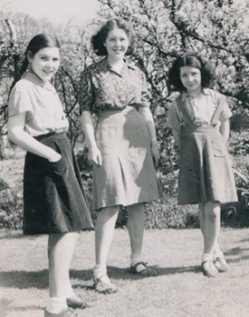 Diana Wynne Jones took the initiative to make her life not-boring. As the eldest of three, she was required to look after her sisters, and occasionally other village children, while her parents ran a conference center where adults could spend a week or weekend to experience some culture. Nine years old, and in charge of cooking and cleaning for two kids younger than she. To entertain them she would write stories, endless stories, since their parents would not allow made-up stories in their meager library.

I, too, made up stories for myself. They rescued me from the boredom endured in fabric shops as my mother and grandmother pondered over fabric costs and pattern catalogues. I could see roads through the patterns, beasts in the shapes. There wasn’t a monster my trusty Pound Puppy Spike and I couldn’t handle.

Diana Wynne Jones’ mother often called her a “clever but ugly delinquent.” Jones and her sisters were never the priority when compared to work, which left the kids to fend for themselves. Often there was no food in the family residence, and if the kids went into the conference center, the cook shrieked at them to get out. The sisters’ garments were often cast-offs from the orphanage while the parents always had proper clothes. Diana’s sister Ursula even knotted her own hair to keep it out of her eyes. It took 6 months for their mother to notice. Sister Isobel was nearly strangled by the neck when they strung her up to fly about like a fairy. God forbid if they got sick; Diana went to school with chicken pox, German measles, scarlet fever and more because their mother insisted all their illnesses were “psychological.” No grown-up noticed them. Knew them. All they had was each other.

That kind of past is not easily forgotten.

Published in 1981, The Time of the Ghost is Jones at her most autobiographical: neglected sisters whose lives mirror much of Jones’ childhood accidentally awaken an evil god. Time is not one of her most popular books—I’m not sure if it’s the time-jumping or human sacrifice that get people, but any time I hear of Jones, it’s never over this book. Maybe it’s because of her life story, and people take one look and think, “Yeah, right.” When I look at the nightmares of my own past, I know how friends and family would react to the revelation of the Monster who made them: “Yeah, right.”

It’s a harsh epiphany, realizing one’s “normal” childhood doesn’t fit the pattern of others. Memory darns the past to be presentable to the eye: there. Fit to be seen.

So long as no one looks underneath, and sees the desperate stitches and knots that hold the perception together.

Perhaps this is why I connected to Diana Wynne Jones as fiercely as I did: she pulled the old pain out of her closet, put it on, and stepped out into the world. Sure, it had the dark red glitter of a wicked fantastical god stitched on, but it was still her.

It only took her several decades to do it.

And if she could do it, then God-willing, so can I.

A fantasy and science fiction blog

The World Was Hers For The Reading
The Throwaway Pages

Spillover thoughts from writing and life.

Feel the rain, take a book and have a cuppa:-)