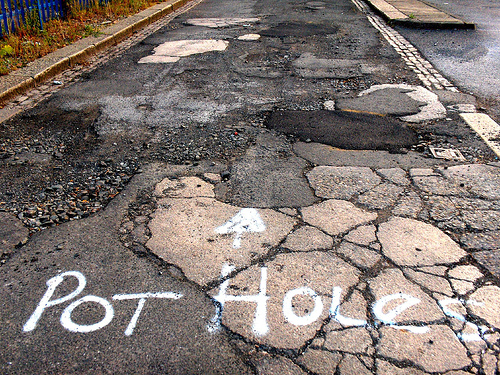 Nothing irritates readers and writers alike like a plothole.

Take the film version of Harry Potter and the Prisoner of Azkaban. When Lupin and Sirius Black confront Harry, Hermione, and Ron, they talk about the Marauder’s Map and how it never lies. This is how they realize traitor Peter Pettigrew is not only alive, but disguised as Scabbers, Ron’s pet rat.

How do Lupin and Sirius know about the map? Because they made it. Their nicknames—Mooney and Padfoot—are on the front. The book makes this a neat little reveal.

I doubt whether any Hogwarts students ever found out more about the Hogwarts grounds and Hogsmeade than we did….And that’s how we cam to write the Marauder’s Map, and sign it with our nicknames. Sirius is Padfoot. Peter is wormtail… -Remus Lupin, Chapter 18

The movie completely ignores it.

Without this reveal, movie-goers are left to wonder why on earth Lupin and Sirius know how the map never lies, let alone how it works. There was a special trick to opening it Harry had to learn from the Weasley twins. In this film, there’s no reason given why any adult should understand the map.

Such plotholes infuriate because they can be so easily mended with just a line or two. Just look at that excerpt from the book: three sentences provide all the explanation we need in regards to Lupin and the map.

Take another bit of the film version. Thanks to the invisibility cloak, Harry overhears Professor McGonagall talking to Madame Rosmerta, owner of The Three Broomsticks in Hogsmeade, about the murder of Peter Pettigrew by Sirius Black. We get two crucial pieces of information: All they found was Peter’s finger, and that Sirius is Harry’s godfather. This scene only lasts a minute or two. There’s maybe half a dozen lines said. But these lines help provide some major plot points to the story: why Sirius seems to be after Harry, and how evil Sirius (supposedly) is. Without this scene, the audience wouldn’t know of any motivation of any kind for Sirius to act as he does. So why on earth couldn’t they take the time to connect Lupin and Sirius and the map?

To ignore a plothole, any sized plothole, is not only a disservice to the story, but careless, too. Why should readers care about a story when the writer can’t be bothered to care her/himself? Especially when so often these little plotholes can be fixed with just a line or two.

I discovered a similar situation in my own novel, Fallen Princeborn: Stolen. My heroine initially asks a secondary character for her phone to contact a family member. One chapter later, she’s using the alarm on her smart phone. Why on earth is she asking for someone’s phone when she has her own?

It’s a small plothole. I could ignore it. Gosh, I’ve been ignoring that inconsistency in every draft.

But as my favorite author Diana Wynne Jones has said:

You are doing to read [your draft] and admire all the bits you like…but, while you admire, you will come across bits that make you sort of squiggle inside and say, ‘Oh, I suppose that will do.’ That is a sure sign that it won’t do….think hard about these bits, what is wrong with them and how they ought to go to be right.
“Some Hints on Writing”

Lupin only had to say, “The map never lies. I know, because I helped make the map.” Plothole filled. In my case, I’ve only to note the heroine’s phone battery died. Another plothole filled.

When you take your editor’s walk through your draft, don’t just squirm and ignore the plot holes, leaving them for others to trip on later. Don’t be careless. Give your writing the attention it deserves, and every step readers take through your story will be a pleasure.