Ugh, I got to apologize in advance. My writing brain is NOT with me right now.

Not because of my kids (for once). No, Biff and Bash’s concert went swimmingly. The boys knew their recitations and songs. Bash got over his stage fright that brought him to tears that morning, and Biff made himself emcee the event by naming every child about to recite and every song about to be sung. He even said, “It’s time for applause!” whenever a song finished. It was both embarrassing and awesome all at once. xxxx

(It figures the one picture I took is blurry. Gah! Still, if you look in the back row, you can see Bash at the end of the row on the right wearing a striped sweater. Biff is four kids after Bash, towards the middle of the back row.) 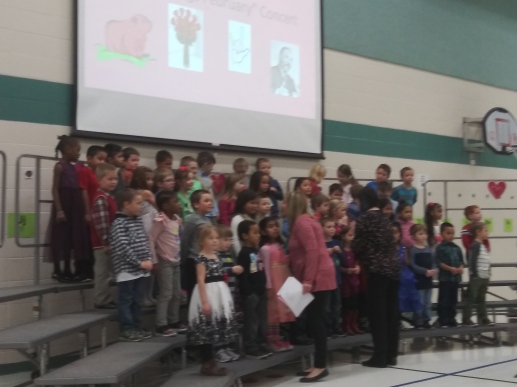 I’m hoping Blondie gets her rear in gear on her big Science Fair project (“I know what I’m doing, Mom.” “Why don’t you start, then?” (insert dark stare and curt shrug here)), but that’s not what threw me off my game today, either.

Nope, it was the refrigerator.

Damn thing near broke on us this morning.

Since this August we’ve had the air conditioner die, the basement flood, both cars’ windshields’ get cracked, the furnace almost die aaaaaand the stove almost die, so the fridge almost dying just made me want to scream ARE YOU FRICKIN’ KIDDING ME?!?!

Thankfully the repairman managed to get things situated without costing a car payment. Discovering we’re both parenting twin boys (only his are applying for college), we spent a good half hour after the repair talking about parenthood and college. By the time he left it was afternoon, which is the time I grade stuff.

Hooray for a fixed fridge!

Boo to a morning taken from writing.

As I stare at all our food boxed up on the frozen deck waiting for the fridge to be cold, it’s hitting me that I’m going to have to imbibe more of the Whole30 stuff sooner than later. My good creamer’s going to run out this week. Even if Bo liked the cashew milk, I don’t think he can finish it by himself before the expiration date.

Oh well. At least you can read the stuff I’ve already written while I lock myself away tomorrow to write more new stuff! There’s free stories here and here, and my novel’s on sale. Please be awesome and spread the word!